The origin of the true spa is affiliated with the noble family Clam-Gallas. In 1636, they gained the Frýdlant domain from Emperor Ferdinand II as a reward for their loyalty to him in the march against Albrecht von Wallenstein.
Filip Josef Gallas died in 1757 leaving behind no direct descendants. His wife was named successor provided that after her death (1759), the property, coat-of-arms and name would pass on to Kristián Filip, the son of her sister Aloisia of Clam. A condition of this arrangement was that Kristián Filip and his descendants had to attach the name Gallas to their existing name. In 1768, Kristián Filip was confirmed by the empress in the ownership of the Gallas estates and coat-of-arms. And that is how the family branch Clam-Gallas originated.

It was Kristián Filip himself who is credited with the first spa construction. These emerged around 1760. Other spa buildings mentioned in historical records were built over around two decades later. In 1779, it was the storied dining hall - Trakteurhaus with 28 rooms and a large dining room, which transformed in the evenings into a dance hall. A mineral spring building was added in 1783 (“Sauer Brunn Gebäude”). Built in the years 1789 to 1795 were the buildings "Zum Schwarze Adler", "Turkenkopf" and "Schlosshotel". Separate spa buildings were built for gentlemen and ladies.

t the end of the 18th century, Kristián Filip had the spa park built in English style. Still standing at the edge of the park is the old bent lime tree with crucifix.
Around 1800, Kristián Filip built for himself a promenade and diminutive Empire chateau with the Clam-Gallas coat-of-arms, where he would live in the summer months. He also commissioned the building of the theater, chateau stables, coach house and pavilion above the Marian spring. In this building, the gilded head of a Turk was displayed. That's why it bore the German name Turkenkopf. Kristián Filip died in 1805. His son Kristián Kryštof continued to develop the spa. Thanks to the support of the Clam-Gallas family, an independent school was established in 1819. 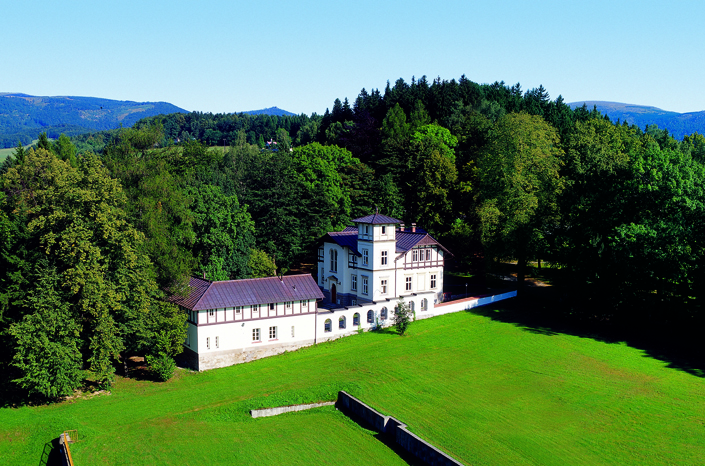 In 1836, the provincial committee bestowed upon Libverda the Statute of a Healing Spa. In the same year, a two-wing colonnade was built with Dorian columns on prismatic plinths boasting adorning gloriettes. The year 1868 saw the opening of the New Spa House (formerly Helm). In 1911, this caught fire and was demolished. Construction followed of a more modern building named “Ostrava”, today’s Clam-Gallas Palace, in the age of the socialist spa industry.

By the late-18th century and early-19th century, the spa was so popular that more and more well-known figures began visiting it. The Austrian Emperor himself, Josef II, visited it in 1779, followed by a visit by Grand Duchess Anna Feodorovna of Russia in 1807. Other guests included composer Carl Maria von Weber, Czech scientist Josef Jungmann and more.

In 1898, a permanent post office was established in the municipality. In 1900, the railroad line was opened from Raspenava to Bílý potok, which improved the availability of the spa. The early 20th century saw the building of a tennis court, playground and a pond for swimming.
Libverda was known for expediting healing water called “libverdská kyselka“. In 1910, its sales reached 200,000 bottles. Bottling of the local mineral water ended in the 1930s, and it is instead drawn from a depth of around 100 m into tanks, and after heating it is used mainly for spa baths.

In 1906, the new name of the town was approved: Lázně Libverda [Spa Libverda].

Over the 20th century, Lázně Libverda was among the quintessential spas of Czechoslovakia and the Czech Republic, thanks in part to the town's elevation to the status of a state spa in 1936.

The key accommodation facility Nový dům was built in 1986. In 2000, it underwent complete modernization. Next to be reconstructed was the guest house Frýdlant, the restaurant Valdštejn and guest house Labská, once a recreational building of ČS Plavba Labsko-Oderské.

In November 2006, the next part was completed of the EU project “Frýdlant Region - Tourist Destination“, which is the local panorama circuit called “Panoramas over Libverda”. It involves 5 attractive lookout points furnished with wooden stands with information boards. These share with visitors the stories of local legends.

Spa Resort Libverda is gradually restoring itself and modernizing its spa buildings, outdoor spaces and facilities.
Other important spa guests among the many were writer Franz Kafka, German natural scientist and co-founder of geography as an imperial science Alexander von Humbold, Czech historian and professor at Charles University Josef Vítězslav Šimák, the son of the father of the Czechoslovak nation and later foreign affairs minister Jan Masaryk, and not the least of which, world-renowned symphony conductor Václav Talich.